This webcam is located at the USGS stream-gaging station on MERCED R A HAPPY ISLES BRIDGE NR YOSEMITE. This station provides continuous monitoring of certain river conditions such as flow and stage. The webcam provides valuable information to Yosemite National Park, the National Park Service, and the National Weather Service to evaluate real-time conditions in the river channel during storms. A visual record of flooding also provides valuable research data for the USGS. 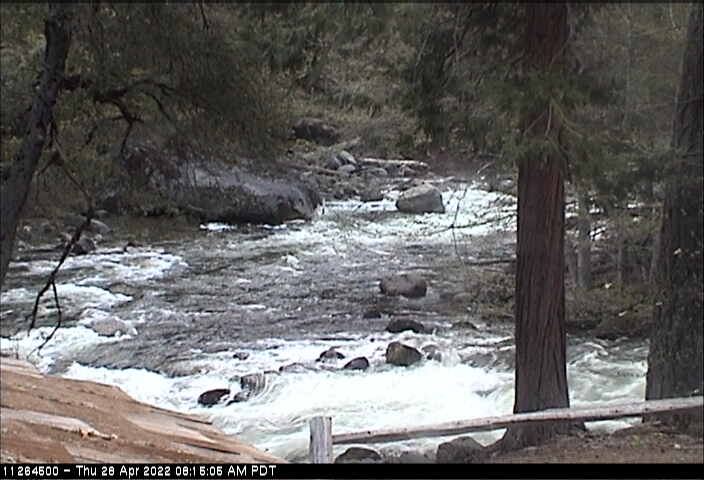 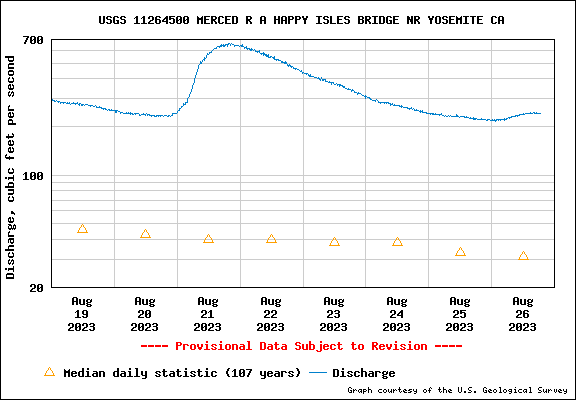 On Aug. 20, 1915, Mr.Charles Leidl of the USGS established a staff gage at the Happy Isles Bridge.

In 1916, it was determined that Sierra Nevada streams fed by melting snow showed a large diurnal fluctuation from April through June. This fluctuation was at times so great that the flow during the warm part of the day might be as much as 50% greater than the flow just a few hours before and after. Under these circumstances, one or two staff gage readings a day might give very misleading results. Consequently, on Nov. 2, 1916, Mr. F.C. Ebert of the USGS installed one of the first two automatic water-stage recorders to be used in the Yosemite Valley.

In 1918 the stilling well was lined with concrete and in 1925 the weekly recorder was replaced with a continuous recorder. The stilling well and shelter were in use until 2010.

As part of the Hydrologic Benchmark Network, discrete as well as continuous water quality data have been collected periodically since October 1965.