What do these graphs mean?

What is a Water Year?

The term U.S.Geological Survey "water year" in reports that deal with surface-water supply is defined as the 12-month period October 1, for any given year through September 30, of the following year. The water year is designated by the calendar year in which it ends and which includes 9 of the 12 months. Thus, the year ending September 30, 1999 is called the "1999" water year.

What are the units?

What is a drought?

A period of deficient precipitation or runoff extending over an indefinite number of days, but with no set standard by which to determine the amount of deficiency needed to constitute a drought. Thus, there is no universally accepted quantitative definition of drought; generally, each investigator establishes his own definition.

The following paragraph (Hoyt, 1936, p. 2) discusses the problem of defining a drought:

When in an area that is ordinarily classed as humid, natural vegetation becomes desiccated or defoliates unseasonably and crops fail to mature owing to lack of precipitation, or when precipitation is insufficient to meet the needs of established human activities, drought conditions may be said to prevail. Although water for irrigation or other uses in arid areas is always limited, special shortages in such areas are also regarded as droughts. Unsatisfactory distribution of precipitation throughout the year may be as effective a factor in causing a drought as a shortage in the total amount. Temperature and wind may also play an important part, especially in relation to the damage done.

Click and drag across the graph to zoom.
Roll over graph lines for specific values.
Click legend to toggle graph lines on and off.

Click and drag across the graph to zoom.
Roll over graph lines for specific values.
Click legend to toggle graph lines on and off. 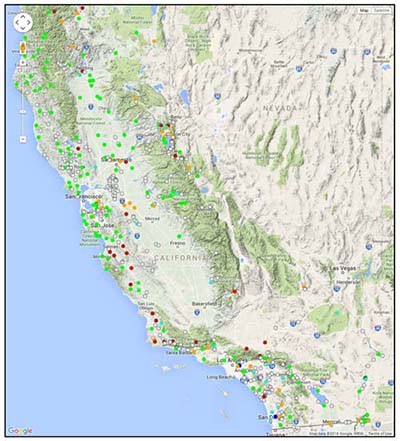